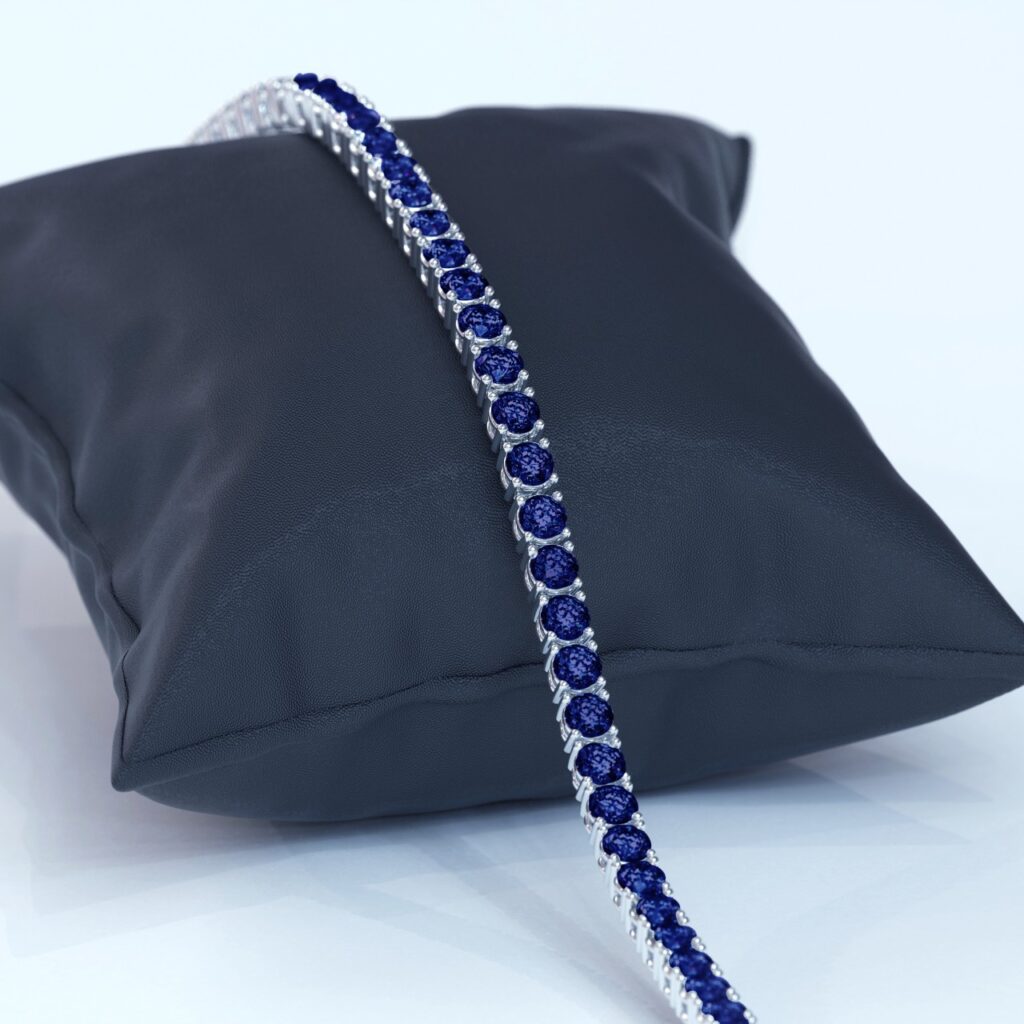 Sapphires are one of the three precious colored gemstones. The others being Rubies and Emeralds.  It is a variety of the mineral Corundum which is a mineral that includes both sapphires and rubies. Red corundum is known as ruby and all other colored corundum are known as sapphires with blue being the most common. Sapphires that are not blue are known as fancy sapphires and can occur in yellow, purple, orange, and green colors; “parti sapphires” show two or more colors.
The Highest quality sapphires come from Kashmir but premium sapphires also come from Burma, Sri Lanka, and Madagascar.
Blue Sapphires
Color has the greatest influence on a sapphire’s value, and preferred sapphires have strong to vivid blue color saturation. The most valued blue sapphires are velvety blue to violet blue, in medium to medium-dark tones. Sapphires with these qualities command the highest prices per carat. Less valuable blue sapphires might also be grayish, too light, or too dark.
Sapphire Clarity
Blue sapphires typically have some inclusions. Blue sapphires with extremely high clarity are rare, and very valuable.
Clarity Grading For Gemstones
Like with diamonds clarity is an important factor and has an impact on a gemstone’s price and rarity.
Type 1 – Sapphires are typically “eye-clean,” meaning that they have no inclusions visible to the naked eye.
Type 2 – Sapphires which display some inclusions visible to the naked eye. However, they don’t detract from the overall wonder and calming nature of the sapphire.
Type 3 – Sapphires with inclusions visible to the naked eye.
Sapphire Carat Weight
Blue sapphires can range in size anywhere from a few points to hundreds of carats, and large blue sapphires are more readily available than large rubies. However, most commercial-quality blue sapphires weigh less than 5.00 carats.
Treatment
Sapphires are usually treated by several methods to enhance and improve their clarity and color. This is a common practice dating back thousand of years.
Heating is is done by heating the sapphires in furnaces to temperatures between 800 and 1,800 °C.   Un-treated natural stones are somewhat rare and will often be sold accompanied by a certificate from an independent gemological laboratory attesting to “no evidence of heat treatment”.
Though treated these gemstones are 100% natural since they are mined from the earth unlike synthetic sapphires man-made and grown in a lab and have very little value.
Belgium Diamonds only offers natural sapphires.

(Some of our replies sent by email may be filtered as spam or blocked entirely. Please include your telephone/whatsapp number so we can verify that our emails have been received).